Book Review: "When the Fight Goes To The Ground", by Lori O'Connell 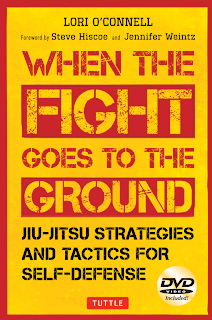 This book can be purchased here: When the Fight Goes To The Ground, at Amazon.com

Being a Kajukenbo practitioner, I looked forward to reading this book mainly because of the expectation of seeing a mix of striking, kicking, and ground work. I wasn't disappointed. Now, before I go on, I just want to say that although I've learned very basic groundwork through Kajukenbo, I'm in no way skilled enough to even so much as compare myself to Brazilian Jujitsu or MMA. *This is why I read this book*!!

The Book:
First off, I'd like to say that I've already read a few reviews of the book. What I've noticed in one review that was a bit less than favorable, is that it was written from a *established grappler/BJJ* point of view. I think that some others who reviewed the book, were looking at it from a competitor's point of view, and I'll bet, flipping through the pages to see if the triangles were done correctly or if Kimuras were locked in tight enough. Ms. O'Connell clearly states that she is not a BJJ black belt, so I find it unnecessary that people review the *techniques*. Its so easy to read into things and get a bit critical as an "expert"......so rather than look at this book from a "martial artist's point of view" or a "teacher's point of view", I'm going to get right into it as a "practitioner's" point of view....a view stemming from several decades of martial arts but not as much groundwork, and also look at the book from a woman's point of view.

It is refreshing to see a book that gets to the point right away, without leaving a reader guessing as to whether or not the book was a "win in the ring" or an "introduction to grappling". The author, Lori O'Connell, has been a practitioner of Can-Ryu, a "modern/traditional" system of sorts....and being a woman, she mentions "What I lack in size, I make up with tenacity". This drew me to the book because 1) In the case of women using ground skills for self defense, its one thing to get a  man teaching a woman how to handle herself on the ground if she's ever put in that situation....its another when you get a woman teaching a woman. Women who are skilled at the ground game already know what tools they have at their disposal, and what limitations they have to consider. Guys....well....have to guess at those. Even if men are smaller in stature, the upper body strength factor is still something that won't allow men to really understand how women roll. No pun intended.

Ms. O'Connell adds well researched information on the percentages of fights going to the gound. These percentages aren't educated guesses.....she took the time to research legitimate sources to attain the statistics, and the statistics would make anyone consider learning even basic ground skills if they didn't have it already.

Before the book even gets into techniques, Ms. O'Connell makes a clear delineation between the ground "game" in the competition situation, and the ground skills for actual self defense. She makes it clear from the get go that the street has no rules, and that no announcer is going to preface your self defense situation with "Let's get ready to Rumblllllllllllle!".  When the book does get to techniques, it covers the primary tools...understanding the ground, how to stay safe on the ground, understanding size differences, training options, vital targets for striking and kicking (not just grappling, but yes, striking and kicking),  and other "need to know" (or "need to be reminded") items. This was a good thing to see, in that I've seen many books that cover history, then shoot right to techniques. 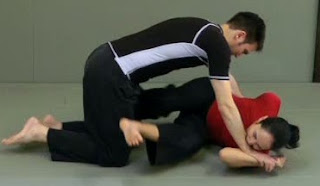 The Techniques:
Ms. O'Connell starts off with "weapons of opportunity". Let's face it, we're probably not going to be wearing our sponsor-patched keikogi and obi out on the street, so it makes sense that she introduces the use of found objects, the environment,or things in our pockets as equalizers to the fight.  I liked the reminder that there are no soft mats to roll on in the street, and  introduction of how to fall on concrete.

The photos in the book are very clear....great choice of contrasting shirt colors to make it easier to follow the photos. Techniques against standing attackers and mounted attackers led the segment. All of the techniques were photographed well, and each photograph is accompanied by steps on performing the technique, and things to watch out for.

What I found interesting, was defenses against side controls and bottom controls. One might think "If I were to be using ground skills in a real self defense scenario, why would I need to worry about being put in a side control, bottom control, or even neck restraints and submissions like in the ring?". Well, a good point made was that you never know if a grappler will be under the influence of drugs or alcohol, or even just showing off to friends and don't know their own strength or have proper control. I also see that many split second moments in time during a fight, will have physical reference points with which these techniques against side controls, bottom controls and neck restraints will apply.

For the most part, the techniques are easy to follow, although there were just a few places where I couldn't quite get the gist of a movement. But....that's what the DVD is for. 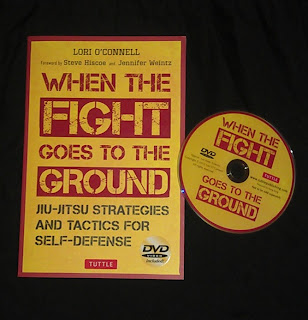 The DVD!
Okay... a DVD was included with the book! Good call, Sensei O'Connell. One can actually see the techniques depicted in the book, done in real time. All you have to do is rewind a bit to catch a technique over and over. Well filmed. Kudos to Sensei O'Connell's Ukes for taking the brunt of the techniques!

Final Words:
In short, the book is an excellent source of reference for students of grappling arts, a great introduction to using basic ground skills for those with little or no grappling or martial arts experience, and a good reference for established grapplers to look at the art from a self protection or woman's point of view. By all means, this book is not meant to teach a complete art or system in 192 pages. If you get this book, which I do recommend, use it as a reference for tactics and strategies.....by all means, if you want to get more in depth, seek the tutelage of a qualified instructor. This book will be a good supplement to your training.

Awesome, well-thought through review! Thanks for your time and efforts on it! :)